NextBranding. Why you’ve (probably) got it all wrong.
resourcestipstraining

For many persuasive communicators, collecting angles is a massive missing piece of their creative work life.

There’s no nice way to say this: I have met and worked with many, many producer/copywriters/creatives over the years; and most of them have absolutely no idea what the hell they are doing.

That’s definitely not to say they don’t make great work. It’s just that they are not consciously aware of what they are doing, nor how they arrive at the good ideas that are the foundation of their great work.

Like all creative endeavours, there’s a lot of mystique surrounding ideation. There’s an otherworldly feeling that comes with having a good idea. It’s as if the idea is visiting you; as if the idea has always been there, waiting for you to discover it.

And while there may be a tiny selection of true geniuses out there, for whom daydreaming is the only thing they need to do for great ideas to flow––and I do mean a tiny selection––for the vast majority of people––you included––the process of ideation requires practice & preparation; time & discipline.

One crucial part of what is absent in the day of many creative people is time spent collecting angles.

Okay… “collecting angles” is what I call it. But, not only do many creatives not have their own version of it; most bafflingly, when they learn about it, they don’t seem to appreciate it as something that’s a massive missing piece of their creative work life.

So what is it? In short, collecting angles is the process of analysing ads, trailers and TV promos. It is about taking the time to identify, label (in your own words) and then compile the approach taken by the pieces of persuasive communication you see throughout your career.

I introduced the topic in my scriptwriting seminar, which might be why you’re here. I also present an in-detail workshop on the topic of creativity in general, which incorporates this process… as when whole teams identify creative angles, only very good things happen.

It is very true that before you can start writing, you have to have an idea.

And, an idea, in the persuasive communication context, is only something that makes people want to try the goods or services that you are trying to sell. Nothing else.

“Wow! I love that drone shot! I’m so-o-o-o going to watch the news on Channel 4 tonight!”
said no one ever.

As you will discover elsewhere in this website, I have very specific opinions about what creativity is and what it isn’t. But whatever you call them: ideas, angles, hooks, even clichés… knowing how spot and identify them takes time and patience.

But you really do have to label angles in words that make sense to you. If you haven’t glommed on to this already, the whole point of compiling this list, is to have a ready source of proven angles that you will be able to pick up and plonk down on whatever you’re trying to sell on any given product/service/show/movie.

Not every angle on your list will work. In fact, most won’t work. But, the ones that do work will force you to think about your product/service/show/movie in a way that your department brainstorming session… or staring at a blank word processor page won’t. 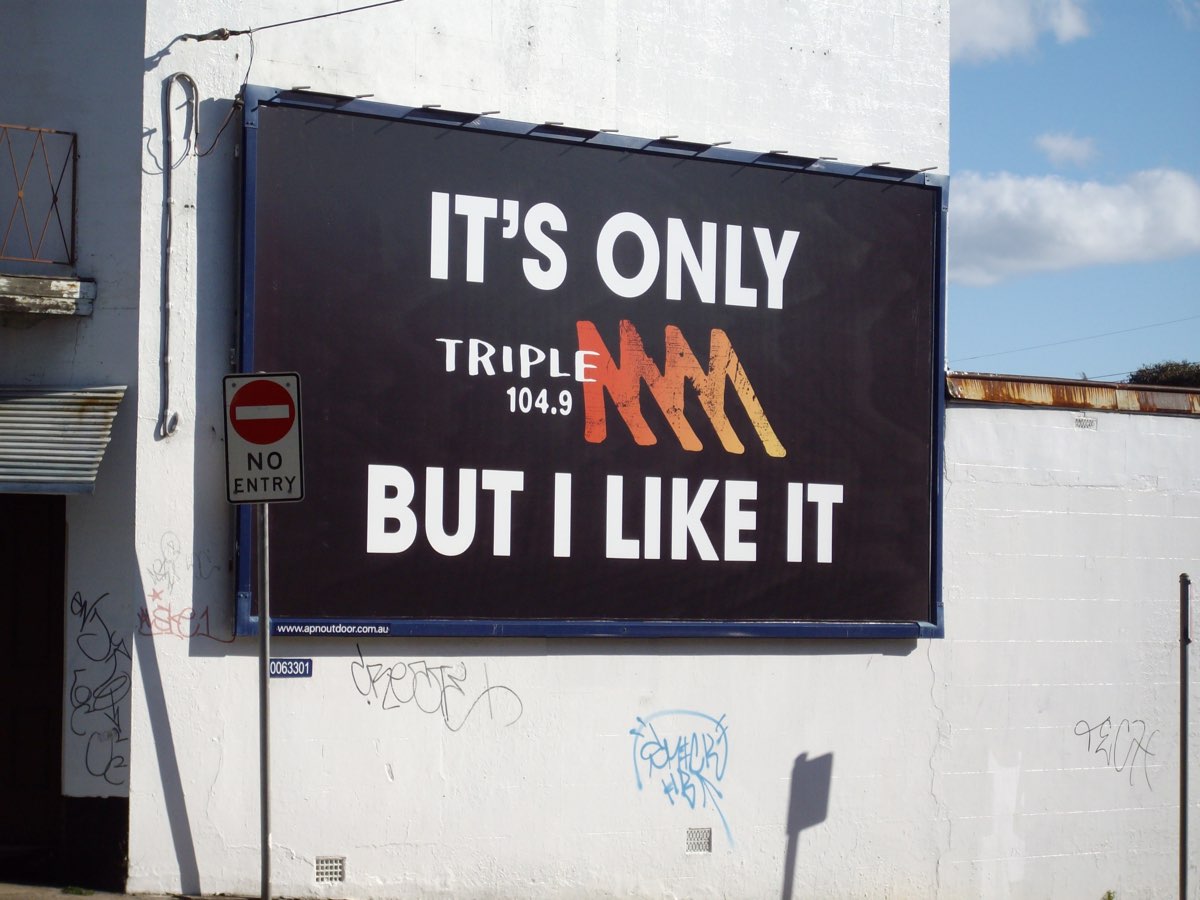 The purposeful deprivation of critical information angle is the oldest trick in the book. While it is––very definitely––a cliché, not using it is a bit like trying to write a song without using musical notes. Like trying to cook without salt.

That’s not to say that many promos and trailers don’t give this a fair try. But every [good] persuasive communication will deliver the viewers a sense of absence that can only be resolved by buying the product, or watching the show/movie.

Examples of omission at its most self-conscious and cheesiest would be lines like: “what’s in the box?” or “who will die?” Removing vital information forces the viewer to become involved in the message whether they want to or not.

In the billboard example above, a conflict is generated because the “rock and roll” part of the famous Rolling Stones lyric has been replaced by the radio station logo. The conflict is resolved when the brain realises that Triple M = rock and roll.

The question isn’t whether to use omission or not; it’s how you are going to use it that matters.