The trouble with creativity

There’s a difference between what your client thinks creativity is, and what creativity really is. Hint: it’s not about copying.

Go behind the scenes of the television/advertising industry, and one might expect that the role of creativity would be firmly understood and appreciated; that the importance and value of creative people would be unimpeachable.

My experience has shown this isn’t the case; it appears that creativity is hopelessly misunderstood.

I want to investigate a few reasons why, but before I do I really should out myself and reveal what I mean by creativity.

Problem solving is typically influenced by external factors, such as:

In a commercial setting, the best solutions are often overlooked because there are four very separate hurdles that have to be jumped; each a skill of their own.

This diagram is way more profound than it appears. And just in case it’s not obvious enough, I have added on the bottom line what the stages might otherwise be called in the world of television production, advertising and promotion.

In a perfect world, a creative would be asked to solve some problem for a client; go off and have a bunch of ideas; select the best one; successfully pitch that idea to client; and finally execute the idea to its full potential.

How it works in reality is mostly quite different. Many, many creatives make their entire career out of their ability to pitch and/or get stuff approved. The same goes for many ad/creative/content agencies. It’s called:

Giving the client what they think they want

There are two main reasons why a producer will focus a good chunk of their energies on giving the client what they think they want:

There may have been a time when a client didn’t have the first clue about the exciting new medium of television; and so, relied on experts to guide them through the process of advertising and production. Those days are over. Today’s businesses typically hire their own media savvy marketing types, who all seem to have very specific ideas about how they want their company sold; and will sign up the people who can produce exactly what they want for the lowest cost.

So, rather than working to solve the client’s problems, the client becomes the problem. The team stops being a creative agency and becomes, effectively, a troupe engaged in what I call client theatre… something which is bad news for the business; the creatives; and the very definition of creativity itself.

It all starts going wrong from day one.

Training typically involves watching other experienced people at the production stage… it’s all about how a spot gets made. Learning this will take a while, it’s no easy feat; but at some stage or other the training will need to be about what gets made.

Training at this stage presents as a list of commandments about what will and mostly won’t get past the client. And, a ton of remakes.

What results is a culture that is one part Stockholm Syndrome, one part Five Monkeys Experiment.

Is it really an idea, or just a production technique?

A telltale sign that creatives are focusing too much on giving the client what they think they want is when the content of brainstorming sessions becomes nothing more than a discussion about possible production techniques.

“I was thinking we use a popular song”
“What about we shoot in high-speed?”
“I like that 3D time-lapse effect that all the music videos are using”
“How about using a GoPro for this?”
“I was thinking something with a lot of quick cuts”
“I’m seeing sLog, and light leaks.”

These (and thousands like them) are production techniques. They are not ideas.

Production techniques work well at the pitch, because they give the client something to visualise… the feeling of substance. By showing examples of the production technique, the client can easily and confidently weigh in with their thoughts about other non-ideas like colour schemes, and music tracks, and logo placements, etc etc.

None of which is creativity.

The culture of copying

Some clients are so risk averse; so unsure of themselves and the medium that they can only really feel confident in backing an idea that has already proven itself in some other (usually larger) market.

Sure, all so-called “new ideas” are built on, or inspired by existing ideas. Copying is a fundamental part of creativity. However, there’s a massive difference between inspiration and plagiarism.

Take the Never Say No To Panda ads from Egypt that did the cyber rounds a while back. Great stuff, right? Well, how about the Boston Bruins Hockey Rules ads that pre-date them, which are pretty much the same concept.

Is Panda a rip-off? Only the copywriter can say for sure. For all I know they’re both stolen from some other ad/TV show/movie. Given that we’re all mining the same creative coal face, it’s a wonder identical ideas don’t spring up more often.

The culture of copying becomes a problem when plagiarism becomes the standard operating system for a company. There’s no need for creativity, when you can simply take the so-called ‘safe option’ by copying the competition.

If you have ever worked for a regional, affiliate, or even just a low-budget TV station or agency, you’ll have experienced the culture of copying in practice.

I would hate for anyone to think that I am singling out Channel Nine here. This kind of thing happens all the time. On occasions I have “copied exactly” spots from overseas at the request of my client. There are countless examples rip-offs that could be demonstrated here… this just happens to be one that I have on hand.

At the same time that the internet is savaging the TV industry, it’s also bringing creativity into the global market by allowing more people to access international TV channels; making it much harder for channels to pass off plagiarised work as their own.

A more common problem is what I call tweed, whereby the very definition of what ad/promo/spot is–– the factors by which it is approved or sent back to the drawing board–– are based almost entirely on emulating what the competition are doing.

The tweed kind of copying is (or should be perceived as) an embarrassing, humiliating and telling mistake on the part of any client or business commissioning any kind of persuasive communication. As succinctly put by better people than me, the client’s business is about standing out, not fitting in.

It’s a small(er) world after all

Television is joining the raft of industries that are now on the so-called international playing field. And just like all those other businesses, TV is suffering all sorts of pain (and opportunities) as a result of being on it.

As advertising campaigns go global, regional advertising agencies are shutting their doors, merging with rivals, and shrinking to a fraction of their former size. You may have loved that Old Spice commercial, but I guarantee you, your local ad agency account execs were fully pissed about it.

There is, of course, nothing new under the sun. Genuinely new ideas are exceedingly rare. What feels like a new idea is probably just a mash-up of two old ideas; or simply an old idea that hasn’t been done in a while.

There are, however, good ideas.
And what makes an idea good is the measure of how well it solves a problem. The simpler, the better.
This is creativity.

Good ideas are the result of time spent on well-defined problems. Everything else is either a bad idea; or simply just another idea. 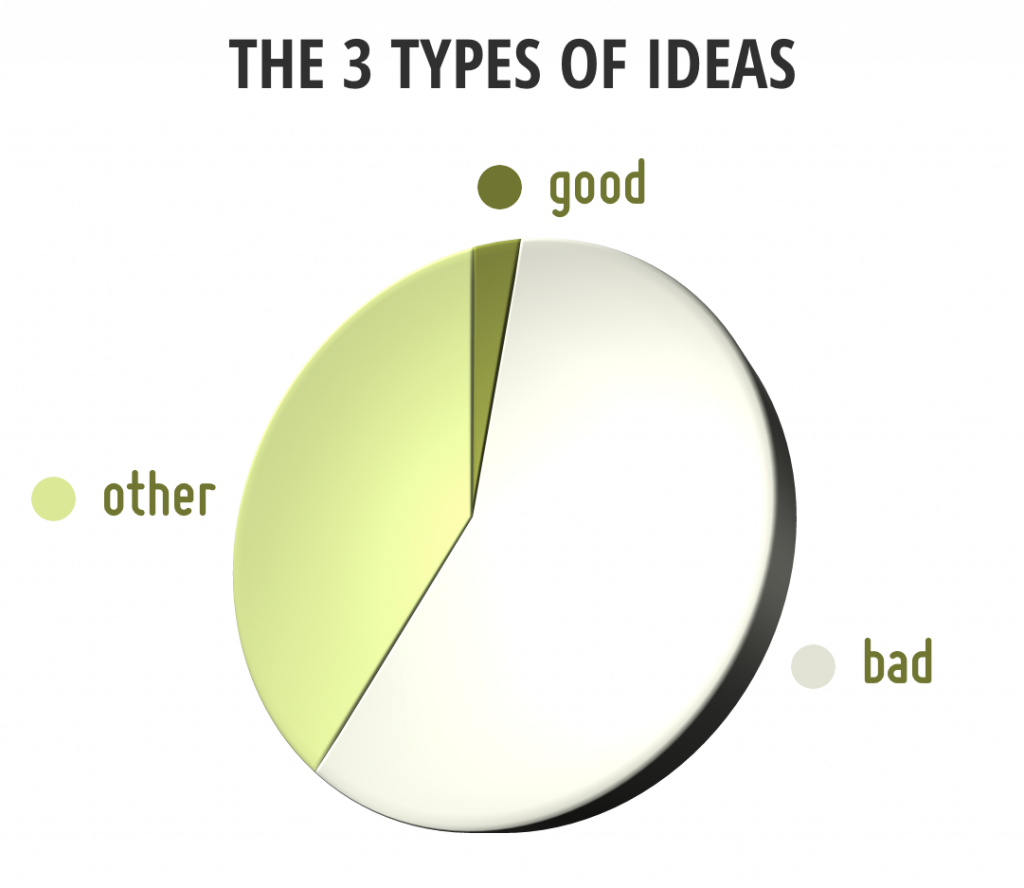 Check out this excellent article at Slate Magazine.